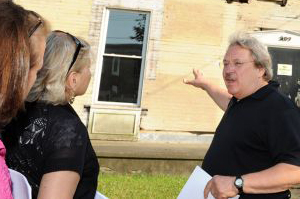 Inside, Kuchma proudly showed off a framed February Los Angeles Times article, “Bridgeport Believer: One Man’s Quest to Heal a Connecticut City.” The West Coast newspaper had taken an interest in Kuchma’s revitalization of nearby Bijou Square with its mix of residential properties, retail, restaurants and the Bijou Theater.

“Everything doesn’t have to be a great big project,” he told committee members. “Pieces at a time can accomplish a lot.”

An hour later, Kuchma was a step closer to adding three more pieces to his downtown portfolio.

The council’s Economic and Community Development and Environment Committee voted Thursday for a one-for-three property swap allowing Kuchma to build two apartment buildings and bring in a gym and possibly a restaurant.

Under the arrangement, which Kuchma hopes will come before the full council before month’s end, the developer will spend more than $1 million to renovate one of his properties, the former American Legion Hall at 307 Golden Hill St., into a new senior center and give the upgraded building to the city.

In exchange, the city will hand over The Eisenhower Center at 263 Golden Hill St., a former YWCA, which now houses the senior center and the Downtown Cabaret Theatre; the empty lot at 285 Golden Hill St. separating the current and future senior centers; and a lot at 1208 Broad St. at the foot of the steps linking Bijou Square to Golden Hill Street.

Kuchma plans to erect a five-story, 50-unit apartment building at 285 Golden Hill St. and a three-story, 12-unit building at 1208 Broad St. He will keep the cabaret theater as a tenant at 263 Golden Hill St., possibly add a rooftop restaurant and return the senior center to its roots, using the existing pool and locker rooms to entice a gym tenant to serve both downtown residents and seniors.

Kuchma will also improve the Broad Street steps to make that area, including the theater entrance, more aesthetically appealing.

“This is a very important step for downtown,” Kuchma told the committee. He said in order for the neighborhood to attract more business, it needs more apartments and residents.

“I for one support any project Phil is involved in,” Blunt said. “He’s shown what works. I don’t fight success.”

“The city loves the Cabaret,” she said.

Councilman Angel dePara, Jr., D-136, was skeptical. He questioned whether the city should get more out of the exchange than a new senior center and nicer Broad Street steps. The city is still on the hook for completing a new Eisenhower Center roof and environmental remediation, including asbestos removal.

“Is this the highest and best deal for this city?” dePara asked David Kooris, the city’s new economic development director, hired last week by Mayor Bill Finch. Kooris helped draft the downtown plan in his former job as a consultant.

When dePara still appeared unconvinced, Kuchma said part of the issue is that the cabaret theater leases 25 percent of the Eisenhower Center for just $300 per month.

“That affects the value of that building more than any other thing,” Kuchma told the committee. “I’m not trying to embarrass the city, cabaret or myself, but facts are the facts.”

Kuchma, the city and cabaret theater are in discussions to amend the theater’s lease, extending it at least until 2027, according to Ronald Pacacha, an associate city attorney who attended Thursday’s meeting.