One man’s quest to heal a Connecticut city 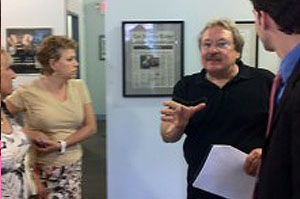 “When you see open land like this, it’s just such an opportunity,” the longtime local developer said. “It could be used for attractive cottages with people walking to the waterfront.”

Kuchma, 61, peers through rimless glasses as he gives a tour of his hometown. But you have to wonder: Are the glasses really working?

Where others in ailing Bridgeport see poverty,

Philip Kuchma dreams of a mini-Manhattan.

The city is full of abandoned factories and derelict Victorian homes. Its shore is scarred with brownfields and a deep-water port that hosts little more than a ferry terminal and ugly utility smokestacks. One-quarter of its children and one-fifth of its residents live in poverty.

But then there is Kuchma, a believer in the power of revitalization. He has argued for years that the only way to revive this city is to get people not just to work downtown, but to live, eat and go to the movies there.

Bridgeport had flings with outsiders with names like Trump and Wynn. There were schemes to bring casinos that failed. So did jai alai. The city is still hoping to make baseball, hockey and artists’ colonies take hold.

Even Kuchma’s mother worries that he’s invested too much money in this long-suffering city, which is surrounded by wealthy communities, including Greenwich and Fairfield, with multimillion-dollar homes, and golf courses that overlook Long Island Sound.

“I’m not building in Bridgeport because there’s a lot of money in it,” Kuchma said. “I’m doing it out of a sense of accomplishment. I’ve always believed our location would overcome the things that held the city back.”

Locals consider Kuchma a Don Quixote of sorts, with a bit of P.T. Barnum, the 19th century circus master who served as Bridgeport’s mayor.

“He’s one of the few with vision,” said Theodore Meeks, a retired police officer who has been frustrated that the African American community on the city’s East End has been neglected. “I take my hat off to a man who can get something, anything, done in this place.”

Kuchma proudly shows off a block of downtown that he has brought back to life — a brick-and-mortar manifestation of a long-held dream.

A few years ago, he bought a cluster of eight buildings on Fairfield Avenue, including a shuttered 1910 movie and former vaudeville house called the Bijou. He renovated and reopened the theater last summer and added an 84-unit condominium complex, parking lot, offices, restaurants and a gourmet cheese shop that relocated from highbrow Westport.

In December, the 202-seat Bijou was packed with visitors who once would have avoided the area: Girl Scouts lining up for a Christmas performance one night, young hipsters for a burlesque show the next.

Kuchma points out that in the 1920s and ’30s, Bridgeport was an important stop on the way to New York City for big vaudeville acts and plays. With two 3,000-seat movie palaces sitting boarded up on Main Street, he believes it could be again.

The condominium complex is almost fully rented with young singles who work in richer quarters of Fairfield County. Eight tenants commute the 60 miles to Manhattan.

Damon Itin, the owner of the new cheese shop, said he was willing to take a chance on the area for cheaper rent and “to be in a place ripe for growth.”

Kuchma’s parents moved here from New York after World War II, when his father joined a workforce of 10,000 at a General Electric plant. Kuchma and his four sisters often visited family on Manhattan’s Lower East Side, where the memory of a vibrant street life stayed with him.

“I have always thought the future of Bridgeport was in rebuilding neighborhoods like Manhattan has — that rely on a creative economy, with artists, hairdressers, graphic designers and architects instead of on just manufacturing like we used to,” he said.

Legend has it that Bridgeport’s factories were so important to the war effort that it topped Adolf Hitler’s list of U.S. cities to bomb. Even after the war, workers streamed in for jobs at Bridgeport Brass, Remington Arms, Singer and helicopter-maker Sikorsky.

But in time the jobs moved out, leaving behind large African American and Puerto Rican communities that still dominate the population of about 145,000. Many of the banks were closed, corporate leadership faded and public corruption shamed the city.

While the rest of Fairfield County prospered, Bridgeport — despite its proximity to wealth, water and rail lines and the appeal of two large parks designed by Central Park creator Frederick Law Olmsted — never came back.

The local newspaper ran a tombstone on Page 1 with a daily murder count.

Kuchma, who studied construction at New York University, bought his first Bridgeport property in 1973. After years of managing other people’s projects, Kuchma decided to try one of his own downtown.